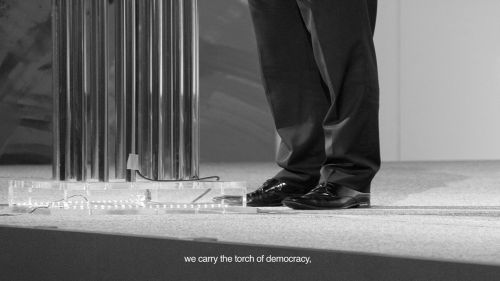 Staging and repetition are essential elements in Christina Werner’s (*1976) installations. Because political propaganda rallies are now “events” with a theatrical character, stage elements such as heavy curtains have become a part of her work. And the title “The Boys are Back” sounds a bit like the name of a musical. Through the act of repetition, which manifests itself not only in collages, but also in video loops, Werner illustrates the thesis that history repeats itself. In view of the growth of right-wing European networks and their pop-cultural media representation, Christina Werner creates an awareness of visual and staging strategies. She approaches the discourse surrounding socio-political problems conceptually, reflecting the relationship between distance and proximity in today’s politics.